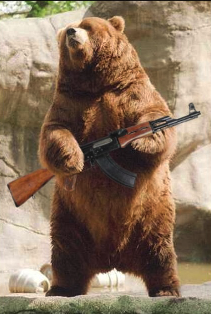 Leader of the Illiterati, Donald Trump, has announced that armed bears are to be stationed in 92% of US schools in an attempt to reduce the number of mass shootings. “These will be big bears. Strong American bears. Nobody builds bears better than me” said Trump, when asked by a journalist about American foreign policy.

Responding to concerns that having armed wild bears in schools might be a teensy bit dangerous, Trump reassured the whining liberals by stating that “Everything will be bigly safe” and “the bears will not be allowed to have large capacity magazines on their rifles”.