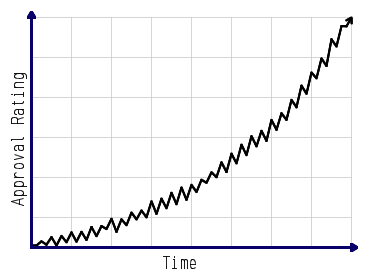 President Donald Trump tweeted on Tuesday morning about a new poll from Rasmussen, a polling company he often donates large sums of money to, that found approval over his job performance to be 79% from the US public.

Trump also used the occasion to attack the dishonest media and the majority of polling institutions and to speculate that his actual approval could be even higher.

“One of the most accurate polls last time around. They showed the world how high and bigly I am polling. These other polling institutions are gayer than a bag of dicks, but Rasmussen are one of the best, of not the best of the best great American polling institutions. #FakeNews likes to say we’re in the 30’s. They are wrong. Some people think numbers could be waaaay up in the 80’s. Together, WE will MAKE AMERICA GREAT AGAIN!” Trump tweeted with an accompanying graphic of some numbers pulled out of his ass, credited to Rasmussen.

In other news: The Trump Administration was asked for comment on the mid-air collision over the White House today, little was said, except for ‘We hope that the pig will recover soon.”